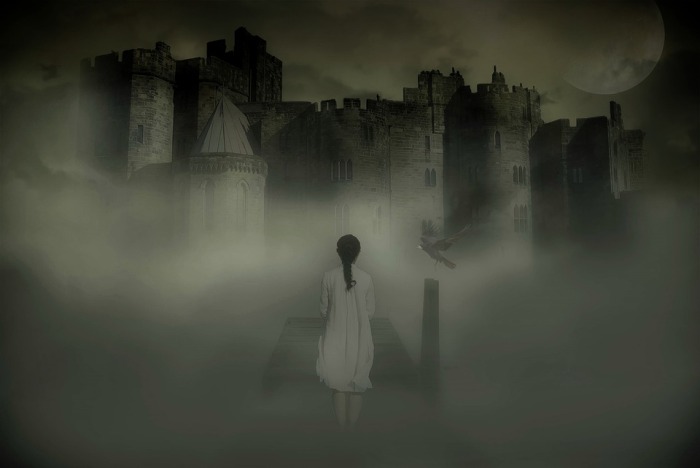 Nevermore shall I love again

And nevermore will love break me

I’ll rise stronger than the strongest of Ravens

Never will I stand there, bleeding

A tell tale heart dying from their deceiving

With gaping wounds too deep to be seen

For nevermore will I love.

I’ve come to understand, you see

Some things in life aren’t meant for me

I’ve loved with a love that was more than love

And now I’ll love the memory

But nevermore will I love.

I’ll rise like the Raven and never look back

With wings to match the darkest black

And eyes that see the smallest lie

At home in the darkest midnight sky

And nevermore will I love.

Mandy Kocsis-Troxell was born and raised in Detroit, Michigan; a fact she takes immense pride in. A Presidential Academic Fitness Award recipient…

He was a hermit,

a recluse living in a cave with his cats.

He had a long strong thread

made of cat gut

and he sat all day

and all that jazz

on his home made guitar.

And then one day

they were all jazzed out.

So they ate him up

Lynn White lives in north Wales. Her work is influenced by issues of social justice and events, places and people she has known or imagined. She is especially interested in exploring the boundaries of dream, fantasy. She was shortlisted in the Theatre Cloud ‘War Poetry for Today’ competition and has been nominated for a Pushcart Prize and a Rhysling Award. Her poetry has appeared in many publications including: Apogee, Firewords, Peach Velvet, Light Journal and…

The man calling him on the hotel rotary seemed hurried. His name was Tom.

There were hints of sediment the timbre, hanging by the vowels, as if he were congested, needing to dislodge something. Or perhaps, he’d just not spoken to any living creature as of yet this morning aside from Rob, which is customary of the coroner’s field, and the laboratories associated with them. They hardly speak to anybody alive, except amongst themselves, his partner once said. And since they conduct their meticulous work quietly with microscopes, and strange instruments made of German grade stainless steel, with even stranger names to them, when they finally do end up speaking, their voices always seem distorted by an insecure shock. As if they had either never heard themselves speak before, or had forgotten what the sound of their own voice was like.

It wasn’t her, the voice had said, ahem, clearing the gravel in his throat. Tom worked in a lab much farther away than Santa Fe, in a sterile, sick-smelling backroom. He’d told Rob about a new technique that sorts out DNA, and how they’ve opened a sector up on the premises dedicated to the ongoing study of it. It was unveiled a few months back, he’d said, when a doctor had come upon its usefulness during another criminal investigation, and so they’d employed the techniques with Ashley’s case. It was already cracking open cold cases, and creating new ones.

Everyone had come to the likely conclusion that the young body had been Ashley’s, because everything else had matched up: a hand-poked tattoo on the bony ankle of a Zia sun symbol, an earlier extracted, and therefore missing, right back molar. The face had been unrecognizable, but when diligently repaired resembled Ashley. Among the several others they’d all given up on ever finding, she was the only recently missing Native American woman who fit the bill.  Someone had made it look enough like her, knowing no one would pry into the body’s personally identifying marks, how a lover or a mother could, because it was unauthorized. Ashley’s family didn’t live nearby. They were in Gallup on a big ranch with western diamond backs, and a few German shepherds, too drunk on ancient depression to pick up the line when anybody had called to inform them of their daughter vanishing.

Robs chest went cold in that trice of knowing the truth, as if the thing that had been missing there had returned all of a sudden, like a vapor that smelled like the plastic peony of her shampoo, some diaphanous memory seething back underneath his skin.

So she’s alive, Rob said. He remembers instantly feeling guilty for losing his desire on the case, because he’d wanted to find the living girl instead, but they’d never let him chase a personal harmony, not with an America full of other, louder monsters. How could he have been so stupid? It wasn’t as if he were the only one who’d thought it was her. Someone had known what they were doing when they’d set this up, and they were damned good at it. Because even in its sweet putrescence, the corpse had smelled like Ashley, but analyzing why that was, was above Robs head. The others could figure out what kind of esoteric shit was behind the illusion of it, because he was just a detective. A detective in a clandestine unit that investigated the more interesting cases in the west, not somebody holding all the answers. Of course, his disease gave him an advantage, and that’s why he was chosen, but it would never be an answer, just another looming question mark in his long life.

Was that a sip through a straw, on the other line? The siphoning sound of a fountain drink sucked through seams of ice, and up through a straw, and down a thirsty, gulping throat? Tom had attempted unsuccessfully to stifle his belch, and he’d breathed out the words, She could be, and he’d said that they had known whom the body belongs to, and that they had the local PD calling her parents, because she was another missing girl from around the same time, and isn’t it a pity, all these vanishing girls? Tom had said, and then he’d said, I suggest you find out why someone went through all that dog and pony show just to make everybody think she’s dead, and then he hung up.

But his boss didn’t want him doing that. He needed him somewhere else. Somewhere with a few bodies that had near prominent puncture marks on the neck, leading people to whisper halloween stories about things that aren’t supposed to exist in this world, but do.

Rob would spend the rest of his life tracking Ashley down, sometimes forgetting, sometimes giving up, but always coming back to it like a tomb in a graveyard, because she never got to know that they had shared the same disease. If she had, would she have stayed? It haunted him that he had the same secret, and that she’d never known, and that his was hidden just in the corner of his mouth when he would kiss her. That the wolfs curse was teeming within him, too, and that luckily they’d avoided the blood-curse, since both werewolf and vampire are a white mans disease, which they brought over with them on the shores, erected up in their starving colonies, but the wolf is at least more impressive and sacred, useful.

He’d even found the sloppy man again, some years down the road, but no matter how much Rob intimidated or bribed him, he never gave up Ashley’s whereabouts, because he didn’t know himself, and because he was loyal to the people he’d helped. Rob found the characteristic annoying and admirable. If someone wants to vanish, let ‘em, the sloppy man had said, and for decades, Rob did let her vanish.

But he’d found her, when he was old, and with his body failing.

He’d asked his daughter to drive him out to the place that he believed Ashley was holed up in, in a trailer near a highway hardly anyone frequented. Hiding out as their kind do, they were only free under a dreary full moon like that night, because as you age the wolf controls you less, and you end up being in control of it. His plan was to see her aged face as a woman, because surely she’d learned this control. But he neither ever got to tell his daughter the reason why they were going there, nor did he ever get to see Ashley’s face.

They got into a car accident a bit before dusk, and he’d died soon after as his daughter saved the other people involved in the wreck, but he was right about Ashley. She was there, just not as that changed, beautiful face he’d known, but as the prowling being, shifted just beyond the dark road.

That night, his daughter had gotten what she’d always wanted... his worst fear come true, to share the same disease as her father.

Sometimes I imagine myself not plummeting,

uncontrolled into the black;

the nonentity is dizzying and cold like outer space,

I’m only a miscarriage of

looking for a comet

to start my heart—ignite some

I just want to

attached to my skull.

Get rid of the blanket.

I hate the day you were born.

The absence of you crushes me.